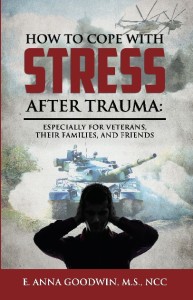 My book How to Cope with Post Trauma Stress: Especially for Veterans, their Families, and Friends is on Amazon both as a Kindle book and a paper book in time for Memorial Day. It includes a stress test, relevant information about post-trauma stress (PTS), Twenty steps to recovery, and help for the veteran’s families and friends.

But, you say, memorial day is to honor the soldiers who have died to protect our freedoms. Yes, you are right. However, I believe that in remembering with love and appreciation all our heroes who have given their lives, we must also equally remember all those who have served us and survived. We cannot separate Memorial Day from Veteran’s Day. Except for “the luck of the draw” the people who died and those who lived are the same, not one more brave and deserving than the other.

Many soldiers in the last two wars have survived because of modern medicine. Many, many veterans are coming home physically and emotionally injured. They are the ones who in the past were the ones who died. As you  have no doubt heard recently, one of the problems we are now facing, is that the country is not prepared to receive and help this many suffering veterans. There are long waiting periods in VA hospitals and doctor’s offices. In the meantime veterans feel hopeless, deserted, and they are dying because of lack of care here at home instead of in a war zone overseas. They feel as though nobody cares. And to some extent they are right.

Because we now have a volunteer army, many people at home are no longer personally or meaningfully invested in what happens in the war. They are told to “go out and shop.” The news rarely covers what is happening out on the battlefield, and we don’t even see the coffins or wounded men come home. We forget they exist, or that we are at war. Of course, since Vietnam, ordinary citizens have learned a lesson they have not forgotten and that is to thank the veteran’s for their service instead of calling them names.

That’s great, but do people really see the veterans and their loved ones as human beings like they are? Can you personally step into a veteran’s shoes and put yourself in her/his place? Or are the veterans merely “out there,” distant from you? Do you know really what they are going through or would you rather inadvertently close your eyes to their needs and their suffering? Did you personally know what was going on in the VA? Did you care when you found out?

So what is the solution? How can we help our veteran’s reintegrate when they come home? Ed Tick in his book  War and the Veteran’s Soul: Healing our Nation’s Veterans from Post Traumatic Stress Disorder, calls war a soul pain, a spiritual, and moral injury. Tick gives a powerful example in his book of how things could be different. He tells the story of how the Native American’s once sent their warriors off to fight for them and how they reintegrated them.

When the veteran’s returned, the entire community would sit in a circle and gather around them. They would allow their warriors to truthfully tell their stories of both the “good and bad things” that happened in battle. The community did not shame or judge them for what the warriors had done. Instead they shared the warrior’s joy, their guilt, and their grief. After all, the tribe had, as a whole, sent the warriors to fight to protect them. The entire tribe listened, they held the returning warriors, and loved and supported them through their time of reintegration (sometimes for months) until they could stand alone again.

What would happen if we helped our warriors reintegrate in this way? It is time for everyone, individually, to take responsibility for our wars and our veterans. We, as a nation (yes, that means all of us personally) have sent the men and women to war and everyone of us must take responsibility to reintegrate them into our society, and not just with money. It means a personal investment in a veteran or veterans that you can help, love, and support physically and/or emotionally.

This book is my contribution to hurting veterans. If you know a veteran or family member who needs the help given in this book, please let them know about the book.

Think about what you personally can do to help our veterans reintegrate and share it with the rest of us this Memorial Day.

Click on image to buy Paperback or Amazon Kindle Version

Listen to an interview with the author about SANDPLAY: what it is and how to use it.